Are you looking for the perfect recipe to make vegan ribs? Then you're in the right place. These ribs are super easy to make, require only 9 ingredients, and are absolutely delicious!

I've made these ribs plenty of times for omnivorous friends and family and they've always been a huge hit. Plus, you can serve them with just about any side dish: from salads to plain rice, pasta etc.

If you're interested in more meat substitute recipes, don't forget to check out my extra tender roast beef, or these delicious chickpea nuggets, or this recipe to make the best vegan chicken!

Before you jump into the kitchen to make these vegan ribs, I suggest you read this blog post carefully. The recipe is simple but there are some steps and tricks to take into account.

What are vegan ribs made of?

Now that you've seen pictures of the ribs you're probably wondering what they're made of.

Well the vegan "meat" (if we want to call it so) is made of seitan, which is a mass made of vital wheat gluten (check this blog-post to know more about vital wheat gluten), chickpeas, spices and broth. This mass is then formed to look like traditional ribs.

The bones are made from horseradish. To make them, all you have to do is peel a horseradish and cut it in such a way as to create sticks that look like bones.

And finally the ribs are coated in a bbq marinade (made of olive oil, salt, maple syrup and smoked paprika) and cooked in a skillet or on a grill for 7-8 minutes.

To make the vegan ribs you'll only need the following 9 ingredients:

Can I sub chickpeas?

Chickpeas together with gluten and broth form the basis of seitan. Chickpeas have the task of making it tender. In fact, if omitted, seitan would become excessively hard and rubbery.

Chickpeas can be substituted with canned kidney or white beans.

Vital wheat gluten is responsible for providing ribs with a texture similar to that of traditional meat. So far I am not aware of any ingredient capable of duplicating the characteristics of it and therefore it cannot be substituted.

Can I sub smoked paprika powder?

The smoked paprika gives a unique touch of flavor to the ribs. In case you can't find it, you can use traditional paprika and add 2-3 drops of liquid smoke.

In case you don't like the smoky flavor you can simply use normal paprika.

These ribs are made using vital wheat gluten. Since this ingredient cannot be substituted it's not possible to make gluten free ribs using this recipe. Sorry 🙁

To make the vegan ribs we start by putting the chickpeas, maple syrup, spices, soy sauce and broth in a food processor.

We blend everything until we get a smooth cream. This step is crucial because for the seitan to achieve a consistency similar to that of traditional meat, the cream has to be completely free of lumps.

Then we add the vital wheat gluten powder and continue blending for a few seconds until a dough forms.

We remove the dough from the food processor, place it on a clean working surface and knead it for 2 minutes until we get a firm, elastic dough.

Once the seitan is made, we cut it into 6 equal parts. Then pressing each part between the palms of the hands we form rectangles of about 7x20 cm.

Once the rectangles are made we form 2 sets of ribs. To make 1 set we have to overlap 3 rectangles of seitan and press them well together to seal (see photo 3).

To make the characteristic strip of fat on the ribs, we blend the remaining vital wheat gluten with some water creating a sticky mass and we apply a thin layer of "fat" to each set of ribs (see pic 4).

Once the ribs are ready we can cook them. To do this we prepare a vegetable broth and bring it to boil. Then we lower the heat and wait until the broth simmers slowly.

At this point we add the ribs and cook them gently for 1 hour, turning them every 20 minutes.

After an hour, turn we can turn off the heat, remove the ribs from the broth and let them rest for 15 minutes. In the meantime we can make the bones and marinade.

While the ribs are resting we can make the bones and marinade.

To make the bones we take the horseradish, peel them and cut them into 5 cm long sticks. We need approximately 8 "bones".

To make the marinade we mix maple syrup, paprika, olive oil and salt.

Once the "bones" are ready we cut 4 holes on the side of each rib set using a knife. Next we stick a "bone" in each hole.

The rib sets should look similar to the one shown on the picture. below.

Next we heat little olive oil on medium heat and roast the ribs 3-4 minutes on each side brushing them with marinade.

Once the marinade is golden, we can cut the ribs in single pieces and serve them right away.

How to store vegan ribs

If you have any ribs left over, don't throw them away. You can put them in an airtight container and keep them in the refrigerator. To reheat them put them in the oven at 180 °C (360 °F) for 15 minutes.

If you want, you can prepare the ribs a day or two in advance. To do this, cook the ribs in the broth, then remove them from the broth and let them cool completely. Once cool, place them in an airtight container and keep them in the fridge.

The next day you can cook and marinate them following the recipe.

If you try these vegan ribs….

Please let me know! Leave a comment, rate the recipe and don't forget to tag a photo with #carlocao or #vegaliciously on Instagram or Tiktok.

Feel free to pin the image below and if you want to follow me there, feel free to click here 😌 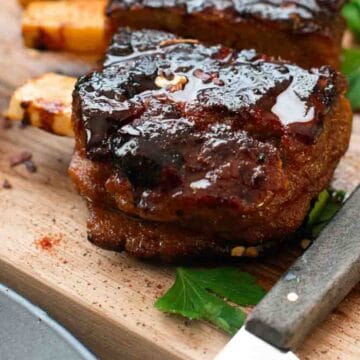 How to Make Extra Juicy Vegan Ribs (made of Seitan)

Keyword vegan ribs
Tried this recipe?Let us know how it was!

My cookbook "Party Food Vegan" is out now!

I'm Carlo Cao a Swiss-Italian foodie! I started cooking for my whole family when I was 12 and since then I have never stopped. Welcome to my kitchen and let my recipes inspire you!